ONE SLEPT IN THE CUCKOO'S NEST

The Backgound Story from the Radwar V2 Party ... 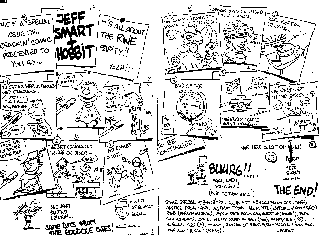 Last time the comic, this time the story! Well it’s some good time ago but I think that nobody forgot that party yet !!! I’m talking about the RADWAR V2 Party that took place on December, 17th ’88. Yo, it was around 9 when the heat was on ... Groups like IKARI, DCS, STRIKE FORCE, TWG, BROS and many others were drinking and dancing. Outside at some more quiet place the German TV Station WDR was interviewing crackers (most of them were really pissed, so I guess they won’t show it on TV !), inside some German music band called ‘The Art Commando’ was giving their best. The Fleet of X-RAY was spreading his self made liquor, which tasted brilliant. ... hic ... Manly the boys from IKARI (Just Ice and Tri-Dos, at this time still in IKARI) and MR. SULU from DCS were given several drinks free... TRI-DOS was given a lot of vodkas ! And then it happened that TRI-DOS destroyed some glasses, he wanted to leave the place together with STRIKE FORCE as they said „Goodbye, Tri-Dos !“ he must have understood something else. MR. SULU was dancing some kind of POGO, but the DJ didn’t play „THE SMITHS“. The climax was the so called travesty-show live on stage. Boys were disguised as girls (really professional!) and RADWAR also climbed on the stage. Three beautiful women dancing their feet off. After dancing up to 3, we wondered where TRI-DOS was ! Finally we found him standing outside in the cold, he laid against a wall and was puking. Hum, the disco then offered people to sleep there and the rest walked around or drove home. In his bad condition TRI-DOS surely did not remember that he was almost killed by the programmer of HAWKEYE for cracking it. ... but it was fun ... ! And we hope for more soon!